Reverend Derricks “In the beginning, Derricks’ basic reason for writing songs was to inspire his fellow poor, black church members during the Great Depression… Cleavant Derricks’ song lyrics brim with steadfast faith and a realness earned from a lifetime of Christian duty.” – All Music Guide

In gospel’s pantheon of important songwriters, it is essential not to overlook the Reverend Cleavant Derricks. Numerous country, bluegrass and gospel singers continue to cover his body of work, keeping a spotlight on the restorative spirit that permeates Reverend Derricks’ lyrics and music. His most well-known composition, “Just A Little Talk With Jesus,” has been recorded hundreds of times by artists such as Elvis Presley, Loretta Lynn, Bill Monroe, the Oak Ridge Boys, Johnny Cash, George Jones, the Zion Travelers, Jo-El Sonnier, and Charlie Daniels, to name a few. Another popular classic from the Derricks catalog is “When God Dips His Pen of Love In My Heart,” which has found its way onto albums by Allison Krauss, the Five Blind Boys, and Mahalia Jackson. The third important Derricks song, “When He Blest My Soul,” has been recorded by prominent southern gospel performers, ranging from the Brown’s Ferry Four to the Gaither Vocal Band. “We’ll Soon Be Done with Troubles and Trials” is another active song from Derricks’ pen, covered by the Statler Brothers. 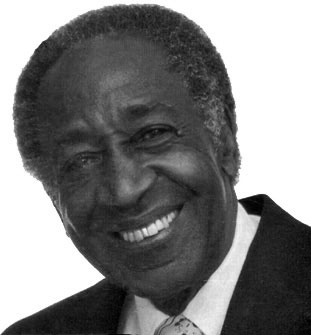 “Born on May 13, 1910 in Chattanooga, Rev. Derricks devoted his life to composing and performing, directing choirs and ministering from the pulpit,” writes Greg Freeman in his SouthernEdition.com essay “The Legacy of Reverend Cleavant Derricks.” “Receiving formal music training at the Cadek Conservatory in Knoxville, Derricks would later study at Tennessee Agricultural and Industrial State College (now Tennessee State University) and the American Baptist Theological Seminary in Nashville. Beyond his songwriting prowess, Derricks was noted for capably directing choirs, including Washington, D.C.’s Vermont Avenue Baptist Church Choir, which was comprised of more than one hundred voices. His ministry would also take him to churches throughout Tennessee and to Beloit, Wisconsin. For more than a decade, Derricks pastored the Pleasant Grove Baptist Church in Washington, D.C. before returning to Tennessee where he built Knoxville’s Ebenezer Baptist Church in the late 1940s.”

In his 1999 book Turn Your Radio On, author Ace Collins observes, “Although eloquent in speech and wise in his understanding of the Scripture, Derricks never held himself above those who turned to him for help and guidance.” And SouthernEdition.com’s Freeman elaborates, “Characterized by a self-effacing, unostentatious nature, Rev. Derricks was able to minister to the beleaguered with genuine love and empathy. His songs acknowledged tough times and called on believers to lean not on their own understanding but to trust in God. The same songs that ministered to impoverished blacks enduring discrimination in the Jim Crow South, spoke to the hearts of disadvantaged whites whose lot seemed similarly dismal due to hardships spurred on by the Great Depression and the World War II years. Derricks would write songs that addressed daily hardships, praised a loving, sustaining God and spoke of the heavenly reward believers would gain following their labour on earth. “

“Though an African American, Rev. Derricks distinguished himself as a songwriter most notably in the singing conventions of the white churches throughout the American South,” says James R. Goff, Jr. in his 2001 book Close Harmony: A History of Southern Gospel. “His songs were published in the most popular singing convention songbooks of the day, joining the ranks of southern gospel’s greatest composers.” Goff emphasizes ,”With an unmistakable influence from the shape-note convention arrangements and a style that often featured the bass part on the chorus, Derricks’s songs found their way into Southern shape-note hymnbooks, though few in the South would probably have guessed the author’s racial origins.”

Greg Freeman adds, “In the early 1950s, several relatives and church members joined Rev. Derricks to form the Derricks Singers, recording for Tennessee Records, a short-lived Nashville label owned by brothers Alan and Reynolds Bubis. Sides recorded included arrangements of “Stand By Me,” a gospel standard penned by another famous black writer Charles A. Tindley, and “Do You Know Him,” a song composed by southern gospel pioneers Charles W. and James D. Vaughan of Vaughan Publishing Company fame. Half a century later, these 78-rpm records by the Derricks Singers are rare finds.” 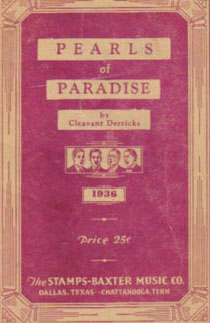 In the mid-1970s, Derricks signed a recording contract with the southern gospel label Canaan Records. For Canaan, Rev. Derricks and his family recorded two LPs; the first, 1975’s Just a Little Talk with Jesus, marked the first time he had ever recorded his most famous composition, the album’s title track. The second release, Satisfaction Guaranteed in 1976, earned the artist his first Grammy nomination for Best Traditional Soul Gospel Performance. Reverend Cleavant Derricks passed away the following year on April 14, 1977.

Reverend Derricks’ remaining heirs are his identical twin sons. Cleavant Derricks, Jr. is the Tony Award-winning actor who created the role of James Thunder Early in the original Broadway production of Dreamgirls. He also appeared in the film Moscow On The Hudson and had a starring role in the sci-fi television series Sliders. Clinton Derricks is also a respected composer and actor, having appeared in television’s Introducing Dorothy Dandridge, The Steve Harvey Show, Highway To Heaven, and Hill Street Blues. “It means so much to me, Clinton, and the entire family to now own the music my father created,“ reflects Derricks, Jr. “It’s a legacy that we thought was lost, but now, all those songs we sang as youngsters in my father’s church will benefit the family for years to come.”

“Undeniably, Reverend Derricks’ ministry and career cannot be assessed solely in terms of hit songs or commercial recording successes,” summarizes Freeman. “One must delve deeper and acknowledge that Derricks’ music inevitably touched millions of lives, and it continues to do so today.”

Just A Little Talk With Jesus

When God Dips His Pen of Love In My Heart

We’ll Soon Be Done With Troubles And Trials

When He Blest My Soul

I Want The Light From The Lighthouse To Shine On Me

My Record Will Be There

My Soul Is Satisfied

Jesus The Light of The World