“An amazing prolific artist who brought a brisk air of urban sophistication to his frequently stunning presentation, Memphis Slim assuredly ranks with the greatest blues pianists of all time.” – Bill Dahl – All Music Guide

Memphis Slim was an important blues pianist and composer whose recordings in the 1940s helped connect the Chicago sound of the 1930s with that of the early post-World War II period. Although his piano style was influenced by other great blues pianists such as Roosevelt Sykes and Speckled Red, early in his own blues career Slim had taken to heart the advice of one of his mentors, Big Bill Broonzy, and developed his own style. So it was that he was the piano player that everybody copied. Among Slim’s most popular songs were the classics “Everyday (I Have the Blues,” “Mother Earth,” “The Comeback,” “Messin’ Around (With the Blues),” and “Memphis Slim U.S.A.” 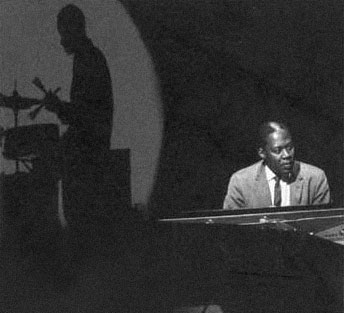 Memphis Slim was born John Peter Chatman on September 3, 1915 in Memphis, Tennessee. As a youth growing up in Memphis, Slim hung out on Beale Street and occasionally worked at blues clubs, where he picked up valuable hints from other piano players. After roaming the South, Slim lived in Helena, Arkansas before moving to Chicago in 1939. That same year he made his debut as a recording artist for the Okeh label, using the name of his father, Peter Chatman. In 1940 he cut one of his trademark tunes, “Beer Drinking Woman,” for Bluebird Records using his nickname, Memphis Slim. Later that year Slim teamed up with guitarist Big Bill Broonzy, and the two musicians played and recorded in Chicago until 1944. It was then that Slim formed his first group, The Houserockers, a seven-piece ensemble including a saxophone section, and recorded such classics as “Lend Me Your Love” and “Rockin’ the House.”

Slim recorded regularly during the 1940s and 1950s for a number of labels, including Miracle, United, Chess, Vee-Jay, Bluesville, and Folkways. He also performed as soloist and with artists such as Willie Dixon and Sonny Boy Williamson. After a European tour with Dixon in 1962, Slim decided to move permanently to Paris, where he was able to record and perform regularly when other bluesmen back home were finding it increasingly difficult to secure steady work. Slim was held in great esteem in Europe, touring throughout the continent in high style. When performing in Paris he would show up in his Rolls Royce and park it right in front of the theater. Memphis Slim was considered a worldwide ambassador of the blues, and in the 1980s the U.S. Senate officially recognized this, honoring him with the title of Ambassador-at-Large of Good Will while the French government bestowed upon him the prestigious title of Commander of Arts and Letters. Memphis Slim passed away on February 24, 1988 in Paris, France.

Everyday I Have The Blues

Lend Me Your Love

At The Gate Of Horn – VeeJay