John Willie “Shifty” Henry was an accomplished bassist, trumpet player, and composer in the classic big-band tradition, with songs recorded by such legendary artists as Charlie Parker, Dinah Washington, T-Bone Walker, Ray Charles, Louis Jordan, and Benny Goodman. A contemporary of Charles Mingus, Ahmad Jamal, Charles Brown and Jimmy McCracklin, Henry was considered a jazz musician of the first order, with a gift for a blues lyric.

One of his better-known songs, “Let Me Go Home Whiskey,” was originally recorded by Amos Milburn and later became a hit for the popular country group Asleep At The Wheel. Henry’s compositions continue to make their presence felt in today’s marketplace, with selected tracks appearing on many T-Bone Walker reissues, “The Mercury Blues ‘N’ Rhythm Story 1945-1955” (Mercury Chronicles Box Set), and “The Okeh Rhythm & Blues Story” (Sony Box Set). B. B. King recorded a new version of Henry’s “Midnight Blues” on his successful 2008 release, “One Kind Favor” (Universal). 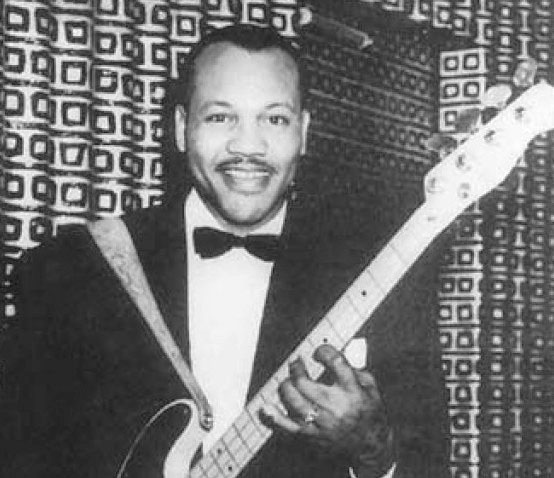 Shifty Henry was born on October 4, 1921 in Edna, Texas and graduated with a degree in music from Prairie View A&M near Houston in 1944 where he was a star center on the university football team. It was his coach who dubbed Henry with the nickname “Shifty” referring to his speed and agility on the field.

“Our house was the meeting place—it was ‘jazz central’ for Shifty’s creative relationships,” recalled his widow Elbie Wade, who passed away in 2004. “Charles Mingus, Miles Davis, Nat Cole, Dexter Gordon, they all stopped in to share ideas. Charles Mingus and Shifty were very close; Charles ended up naming our only child, Cheryl Diane. I could pick up the phone and there would be Duke Ellington on the other end, or maybe Bird [Charlie Parker]. It was a very exciting time for Shifty and the growth of West Coast jazz.” In fact, Leo Fender himself chose Henry as a recipient of his early-model Precision Fender electric bass. Shifty Henry became a pioneer on the instrument, incorporating the electric bass into the modern jazz combo.

While New York had 52nd Street, Los Angeles had Central Avenue, and Henry was a staple at L.A.’s after-hours jazz spots, where he could be heard improvising into the small hours at such famous locales as the Dunbar Hotel, Café Society, Ivie’s Chicken Shack, Club Alabam, and Shepp’s Playhouse. In the summer months, Henry headed east with the Trenier Twins for an exclusive engagement at the upscale celebrity hangout Riptide Club in New Jersey. During the holiday season Henry’s own group, The Shifty Henry All-Stars, were often invited to perform at the private home of arts philanthropist Dorothy Chandler and her husband Otis Chandler, then publisher of the Los Angeles Times.

Henry made it onto the big screen, playing bass with the house band in the 1950 film noir classic D.O.A., and was a regular band member for the popular television program Dixie Showboat. He also played in the studio ensemble for The Colgate Comedy Hour, a weekly TV variety show. “I remember tagging along with my father for his television sessions,” recalls daughter Cheryl Henry. “I was so proud of the respect he commanded around his fellow musicians. He always dressed to the nines, and every detail of his wardrobe had to be ‘just so.’”

In addition to bass, Henry was schooled on numerous instruments, including saxophone, violin, viola, flute, clarinet and oboe. Not one to downplay the value of his higher education, he often signed his name with an Esq. (esquire). Borrowing from compatriot Charles Mingus, he occasionally used Baron Von Shifte, Esq. and as a composer, he employed the pseudonyms Shifte Henri, Shifté Henré, S. Henry, Shifté Henrí and Shiftí Henrí.

Henry died tragically in an accident on November 30, 1958 at the age of 37, leaving behind a widow, a preteen daughter, and a treasure trove of letters, documents, and musical arrangements. His family quickly retreated from the world of music, and rights to Henry’s compositions languished as Shifty’s loved ones put the pieces of their life back together.

But Shifty’s story took a positive turn with the successful use of his song “Hyping Woman Blues,” originally recorded by T-Bone Walker. London-based DJ Mr. Scruff sampled the track in his 1999 dance hit “Get a Move On,” which was then licensed for TV commercials by Volvo and Lincoln. Carefully researching territorial copyright provisions and U.S. renewal and termination rights, along with implementation of the LaCienega Ruling, the Henry family went on to build a classic catalog of songs. The heirs established Henry Heritage Music (BMI) to publish Shifty Henry’s intellectual property.

The legacy of Shifty Henry has come full circle; the songs and their ongoing benefits now have a gatekeeper. The works of John Shifty Henry may at long last take their rightful place in the annals of American music, residing among some of the greatest blues created during its fertile period, which emerged in the late 1940s and beyond.

Late In The Evening Blues

Whiskey Do Your Stuff