He was the first guitar player I heard on record, he made me so that I just had to go out and get an electric guitar…”T-Bone Walker had the best sound I have ever heard” – B.B. King

FOR NAME/IMAGE RIGHTS AND
ALL OTHER LICENSING INQUIRIES
CONTACT: Nancy@batesmeyer.com
(909) 547 0504 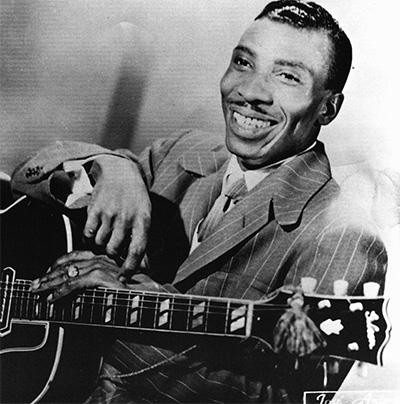 Few postwar blues guitarists come to mind that don’t owe T-Bone Walker a debt of gratitude. B.B. King and John Lee Hooker have long cited him as a primary influence and the T-Bone composition “Stormy Monday” ranks as one of the greatest Blues songs of all time. From Walker, in fact, came the electric blues guitar style.

Born May 28, 1910 in Linden, Texas, Aaron Thibeaux Walker was a product of the early Dallas blues scene. His stepfather was a musician and during one of his jam sessions, Walker had the opportunity to befriend the legendary Blind Lemon Jefferson. Young T-Bone led the sightless guitarist around from bar to bar as the older man played for tips and the young man received his blues education in return. Walker made his first recording in 1929 with a 78 on Columbia Records, “Wichita Falls Blues,” as Oak Cliff T-Bone. However, it was when he relocated to Los Angeles that T-Bone began to make his mark in the entertainment scene, first as a dancer with saxophonist Big Jim Wynn, and then as a singer with the Les Hite Orchestra. Walker recorded the seminal “T-Bone Blues” as a vocalist with Hite, and its success prompted him to start his own band. Soon after that he began experimenting with an electric guitar prototype, integrating his singing and acrobatic dance moves with his guitar playing. It was during this time that Walker contributed his most enduring legacy when he developed the single-note finger-vibrato technique that enabled the amplified guitar to stand out as a lead instrument. Up to this point, the guitar was used mainly as a rhythm instrument in a band setting.

Walker signed with Capitol Records in 1942 and recorded the now-classic “Mean Old World.” This was the first sign of the T-Bone Walker that blues aficionados know and love. His fluid, elegant riffs and mellow, burnished, vocals set a standard that all future blues guitarists would measure themselves by. “Call It Stormy Monday (But Tuesday Is Just As Bad)” was recorded in 1947 on the Black and White label, along with the hits “T-Bone Shuffle” and “West Side Baby”. In 1950 Walker moved to Imperial Records, and more standards followed. “Glamour Girl,” “The Hustle Is On,” and Party Girl,” among others, were released to great acclaim. He then signed to Atlantic and recorded the album T-Bone Blues, which ranks among the greatest modern blues albums of all time.

During the ’60s, when the big-band era was being replaced by rock’n’roll, Walker’s recorded output may have diminished, but his stage show remained legendary with his behind-the-back guitar playing and outrageous stage moves. He participated in the first American Folk Blues Festival in 1962—the tour credited for introducing the blues to European audiences—and many trips overseas followed. Walker was awarded a Grammy in 1970 for his album Good Feelin’ on Polydor, but his health was failing by this time. T-Bone Walker passed away on March 16, 1975 in Los Angeles, his longtime residence.

I’m Still In Love With You

They Call It Stormy Monday

The Hustle Is On

Two Bones and a Pick

Woman You Must Be Crazy

I Want A Little Girl – Delmark

THEY CALL IT STORMY MONDAY (BUT TUESDAY’S JUST AS BAD)

The classic T-Bone Walker song “Stormy Monday” reached an important milestone in 2003 when U.S. Termination rights reverted to Walker’s family. The family music company Lord And Walker Publishing now claims an ownership interest in this historic copyright as it marked its 57th year of registration. Bates Meyer, Inc. is working closely with the Walker heirs and their publishing entity to keep the song active. Some of those who have recorded “Stormy Monday” include; B.B. King, Lou Rawls, Jethro Tull, the Allman Brothers, Count Basie, Jeff Beck, Eric Clapton and Kenny Burrell. As noted in Fortune Magazine, “Two hundred years from now church people will be singing ‘Amazing Grace,’ and two hundred years from now, blues people will be singing Stormy Monday.”